The comment specifically focused on Biden’s statements calling Russian strongman Vladimir Putin a “war criminal” for alleged attacks on civilians in Ukraine. Putin announced a full-scale invasion of Ukraine in February to allegedly ‘denazify’ the country, saying Ukraine had no ‘tradition’ of being a sovereign state and alluding to the elimination of Ukraine as a country. Prior to his strong accusations against Putin, Biden had pursued policies that made America much more dependent on Russian crude oil. Since the ban on Russian oil, Biden has reportedly considered buying oil from the socialist regime in Venezuela, a Russian proxy.

North Korea’s communist government has stepped up its belligerence significantly over the past month, including staging a test of a purported intercontinental ballistic missile (ICBM). Kim Yo-jong, sister of dictator Kim Jong-un, last week threatened a nuclear attack on South Korea.

While recently silent on Biden, the North Korean government has repeatedly insulted him, describing him in 2019 as a “rabid dog” who should “be beaten to death with a stick.”

KCNA published a comment on Saturday allegedly written by an “international studies” expert named Kim Myong Chol, speculating that Biden had lost “his intellectual faculty” and which sparked the aggressive remarks against Putin. Kim admitted, however, that Biden may have called Putin a ‘war criminal’ because his aides simply wrote him into his ‘script’, suggesting that Biden was not allowed to speak freely lest he be inconsistent.

“The latest story is about the US chief executive who spoke ill of the Russian president with baseless data,” Kim wrote, without mentioning Biden by name. “To call the head of a sovereign state a ‘war criminal’ and a ‘murderous dictator’ without justifiable and confirmed reason and to assert that he must be ousted from power is an insult to the other nation and a clear attack on the sovereignty.”

“Such reckless remarks can only be made by the descendants of the Yankees, masters of aggression and intrigue,” the commentary continued. “Perhaps the trouble was caused by him reading a script his aides had prepared in advance, worrying about the president notorious for his repeated slips.”

“Otherwise,” Kim speculated, “the conclusion might be that there is something wrong with his intellectual faculty and his reckless remarks are just a demonstration of the recklessness of an old man in his senility.”

Kim concluded that the latter was more likely “given his subordinates struggled to redeem his inaccuracies,” then appeared to lament the fate of members of the White House communications team.

“No wonder his subordinates begged him not to answer any questions from reporters, struggling to handle the aftermath with their disgraced president like a ‘tongue slip’,” he wrote. “A big question is whether he could have ever done anything good with such an IQ during his flourishing 50-year political career.”

“Dark, it seems, is the future of the United States with such a weak man in power,” the article concludes.

On Monday, the North Korean Foreign Ministry directly attacked Biden, and the United States in general, for his policy towards Russia – in particular for supporting a campaign to oust Russia from the Human Rights Council. of ONU.

“The adoption of this US-Western led ‘resolution’ is an unreasonable act in pursuit of a one-sided and one-sided political objective, devoid of any scientific basis or legal validity,” the ministry said. Foreign Affairs. “In fact, the United States, the world’s biggest human rights violator, has long been disqualified from talking about human rights.” 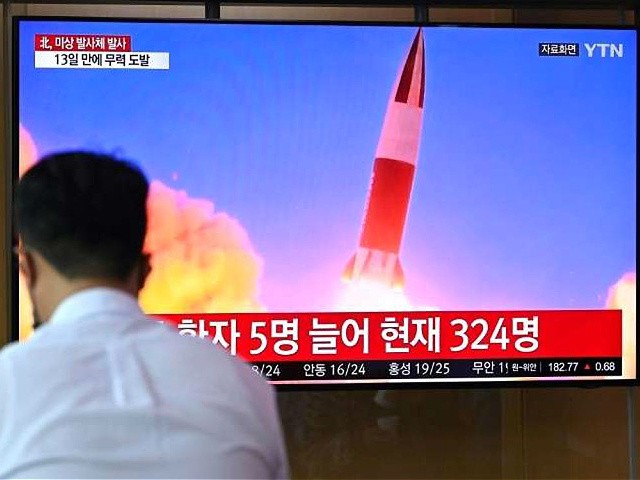 People watch a newscast showing archival footage of a North Korean missile test, at a train station in Seoul on September 28, 2021. (JUNG YEON-JE/AFP via Getty Images)

America pulled out of the Human Rights Council in 2018 to protest that serial human rights abusers populate and control the Council. Biden reinstated America’s membership in 2021. Currently, the Council has some of the worst human rights criminal states in the world, including China, Cuba, Venezuela, Libya, Mauritania, Qatar, Pakistan and Uzbekistan.

North Korea has insulted Biden for years, stepping up its belligerence in 2019 after he entered the presidential race. That year, KCNA released a statement calling him a “low-IQ madman” and a “dumb,” then released his call for Americans to beat Biden “to death with a stick.”

As president, Biden failed to implement a coherent North Korea policy or establish meaningful communication with Pyongyang. During the first months of his presidency, reports surfaced that Biden administration officials were trying to call Pyongyang leaders and receiving no response. In March that year, Choe Son Hui, North Korea’s first vice foreign minister, confirmed that the Kim regime intended to simply ignore Biden.

“The United States has been trying to contact us since mid-February via multiple routes, including New York,” Choe said at the time, according to KCNA. “He recently asked to contact us by sending emails and phone messages through different channels. Even the day before the joint military exercise, he sent a message imploring us to respond to his request through a third country.

Choe called the attempts “a waste of time” and promised “we will not consider such an attempt by the United States in the future as well.”