Ada Hegerberg is one of the most decorated and well-known footballers in women’s football.

But for five years, the first winner of the Women’s Ballon d’Or has been absent from the international scene.

The Lyon striker made the decision to leave her country in 2017 to protest what she saw as a lack of respect for female players in Norway.

Now, just three months from the start of the Women’s Euro in England, the 26-year-old is preparing to make her international return this week after to be named in the Norway team for their World Cup qualifiers against Kosovo and Poland.

So what has changed? And how crucial is her return for women’s football?

“Not satisfied with the system”

Hegerberg’s decision to retire from the Norwegian national team was rooted in a desire to make things better for the next generation of female footballers.

Despite an incredibly successful club career, she had become disenchanted with the national team, unhappy with their treatment of women’s football and what she saw as an inequality between the men’s and women’s teams.

“Being in the national team took more energy from her than she gave in in many ways,” Norwegian football journalist Christina Paulos told BBC World Service’s Sport Today programme.

“She wasn’t happy with the national team system and the way things were going around preparations, matches and training.”

A decisive factor in Hegerberg’s return appears to be the arrival of Lise Klaveness as president of the Norwegian Football Association – a former player who had herself worried about the inequality between the men’s and women’s teams.

“She’s been in this situation before. I think it makes Ada trust her and she hopes she really means what she’s talking about.

“Lise was there before to criticize things inside the federation and I believe that not only the fact that she is a woman, but the person that she is, had a really huge effect on the return of Ada,” Paulos said.

Announcing her return, Hegerberg said she did not regret the decision to step away from the national team, but was delighted to “begin a new story”.

The forward returned to action for her French club in the fall after a 20-month absence following a ruptured anterior cruciate ligament.

“She was injured for a long time and I think she thought she had more to give for the national team and after such a long time away everyone wanted to put things behind them,” said Paulos.

“Now that everyone has grown up, they can move forward together into a new era.”

“I want to create more records”

Any questions about whether she could return to her peak form after her severe injury quickly faded.

In a recent interview with the New York Times, she said: “I want to create more records. I want to come back to score 40 or 50 goals a season. Those are crazy numbers, and it will take time, but I know I can.

“I want to push my limits. That’s what I want to do as an athlete – blast every limit that exists.”

And to be named the first recipient of the Women’s Ballon d’Or at the infamous ceremony in 2018, saw her gain wider recognition beyond the sport.

Her decision, then, not to be involved in international football deprived the game of one of its stars, on and off the pitch.

Rumors started circulating a few months ago that she was reconsidering her international position and when she was named to the Norwegian squad last month she was welcomed with open arms by the head coach of the national team, Martin Sjogren.

“She is world class and has delivered goal after goal on the biggest stages of football for several years,” he said. “Of course getting her back means a lot to the Norwegian national team.” 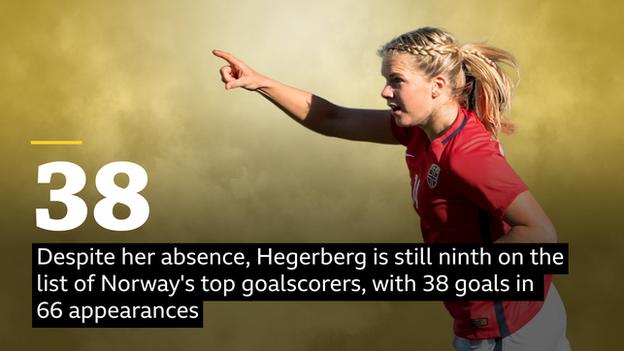 Having a figure of his stature and experience can only help the team, currently ranked 11th in the world, says Paulos. “The Norwegian national team lacks a striker like her – they haven’t had a goalscorer like her since she left the national team in 2017.”

Klaveness said “it was not a good feeling to have one of our best players outside the national team”.

But with the European Championship on the horizon – and games against England and Northern Ireland in the group stage, it’s not just the Norwegian fans, but the fans of the game as a whole who are waiting with looking forward to his return.

Former German player and head of UEFA women’s football Nadine Kessler spoke for many when she tweeted “It’s great to see you again.”

Ukrainian Olympian does his part against Russian invasion